A temple originally excavated in the 1970s and then forgotten has been rediscovered thanks to one Marie Curie researcher’s work in the Italian State archives. Rachele Dubbini tells us more about this exceptional archaeological discovery. 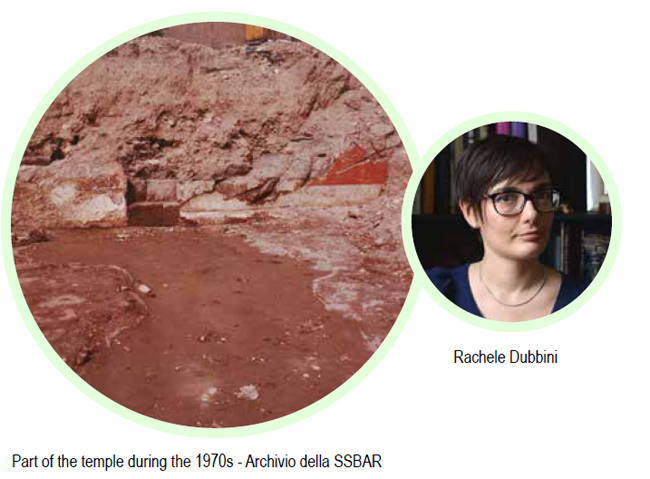 During my Marie Curie IEF Fellowship in the Humanities Department of Roma Tre University I was working on the reconstruction of the ancient landscape of ‘Via Appia Antica’. The project (developed in conjunction with the Soprintendenza Speciale per i Beni Archeologici di Roma), included studying the documents preserved in the archives of the Soprintendenza itself. The plan was to integrate information from the field and from scientific publications with little-known or even unknown material from the archives.

It was a surprise when, among the documents from the 1970s’ excavations, I recognised some photographs of a monumental architectural complex that is no longer visible and was completely unknown to archaeological research! For more than a month, I thought I had made a mistake – surely it was impossible that the monument had not yet been discovered!

The complex is exceptionally large and made of square tuff blocks. The red painted walls with their white base and part of the mosaic floor have been preserved. The building techniques used suggest the construction may date back to approximately the third century BC. But that is not all. It may be interpreted as a double-cella temple, a type of architecture that was rather unusual in the Roman world and was inspired by building models of the Etrusco-Italic period.

News of the discovery of an ancient monument in a city like Rome, is not that remarkable. However, what is remarkable is the discovery of a rare type of ancient temple architecture. This temple lies in an important part of ancient Rome; just beyond the borders of the city, which, since the time of Augustus at least, was formed by the river Almone.

It is well known that the most salient feature of the Appian Way is a series of tombs belonging to important members of Roman society. In this particular area, outside the limits of the urban part of the city, there was a temple dedicated to the god Rediculus, a god connected to the ‘return’ of the souls of the dead. It seems to be no coincidence therefore that, according to tradition, it was in precisely this area that the apostle Paul met Christ. The spot has been marked architecturally since the Middle Ages by the small church Domine quo vadis?

We now know that in the same area as the church, a temple was built, in Roman times, based on a very unique architectural model. It is unique not only because it resembles the buildings of the Archaic period (after all, it is not impossible that the temple was built above a more ancient sanctuary), but because it hints at the existence of a pair of gods, who probably complemented each other. In other words, this discovery leads to a series of topographical and historico-religious considerations regarding the area, which in turn opens up intriguing research prospects. The last months of my fellowship will be dedicated to this research. Progress may be followed here: https://sites.google.com/site/theappianwayproject/home.

A brief note about archaeology
The main task of the archaeologist is to understand the interwoven elements that make up the history of an archaeological context, be it a specific site, a city, or even a region, in order to attempt to reconstruct this history. This kind of research is highly complex, not only because of the fragmented nature of archaeological data preserved up to the present day, but also the laborious analysis and re-composition of all the available information to examine. This includes the texts of the ancient writers, the epigraphic sources, and the geo-morphological conformation. Along with the excavation, there is also an ‘excavation of the excavation’, also known as ‘archaeology in the archives’, based on the study of documentation relating to previous excavations stored in public archives. Contrary to what one might imagine, many European archives are actually still unexplored territory, ‘yet-to-be-excavated’ and may contain discoveries that are no less remarkable than those hidden underground.