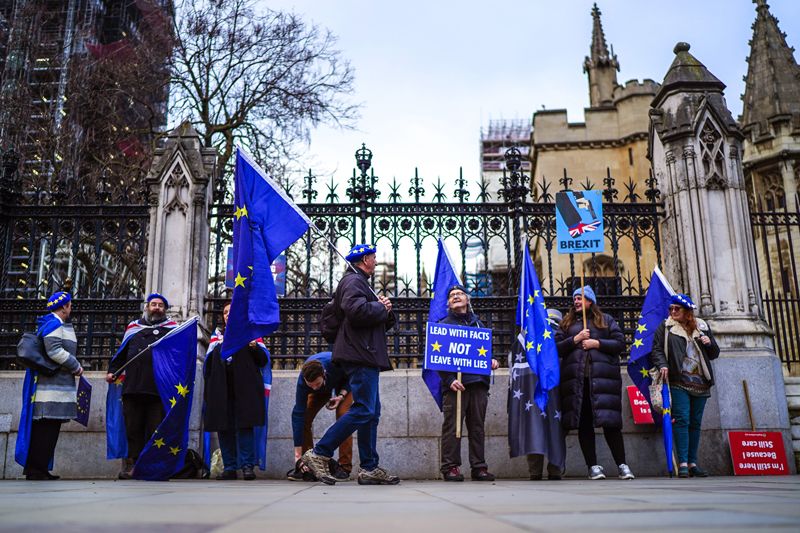 At 11 p.m. on 31 January, the United Kingdom will leave the European Union. Although an 11-month transition period means the milestone will bring few immediate changes for researchers, the day marks the start of negotiations over the country’s future relationship with the bloc, including the United Kingdom’s role in EU science.

The UK government’s list of things to do before 31 December 2020 is ambitious. Its priority will be to secure a trade deal with the EU, to avoid potential chaos from trade barriers erected on 1 January 2021. The government also hopes to create a skills-based immigration system that would end freedom of movement for EU citizens into and out of the United Kingdom, as well as potentially introduce a raft of regulations covering everything from agriculture to aviation.

With Brexit under way, one of the many tasks for negotiators will be sorting out the country’s part in the EU’s next seven-year research programme, Horizon Europe, which will start on 1 January 2021. Any such agreement would normally come only after countries have agreed a trade deal.

“We’ve avoided the nightmare scenario of a no-deal Brexit. But now is the time when big decisions will be made. It’s a critical moment for the future of research,” says Martin Smith, policy manager at Wellcome, a biomedical-research funder in London.

As Brexit begins, Nature takes a look at how 2020 negotiations could shake out for science.

The United Kingdom will enter a transition period that will freeze its relationship with the EU for the rest of the year. Until 2021, scientists will still be free to take up jobs and travel between the United Kingdom and other EU countries, just as before. British researchers will be able to apply for European research funding and take part in exchange schemes. The key difference will be the start of negotiations over the country’s future relationship with the EU — previously outlined only in a non-binding ‘political declaration’ — including participation in Horizon Europe, which is set to be worth €100 billion (US$110 billion).

Will the United Kingdom seek to join Horizon Europe?

On 20 January, UK science minister Chris Skidmore told Parliament that he wanted the UK to ‘associate’ with Horizon Europe — a status that could allow UK scientists to participate on similar terms to those they experience today. UK scientists currently receive more than €1 billion a year from EU sources, as well as a raft of less quantifiable benefits, including access to infrastructure and ease of collaboration. But Skidmore stressed that association would depend on the final shape and content of the programme, which has yet to be agreed by European legislators. Wider negotiations — including agreements on immigration and regulations — are also likely to affect whether this kind of association is possible.

What other factors will affect the United Kingdom’s participation in Horizon Europe?

Skidmore will have to convince the UK treasury that participation is worth the cost. The country has long taken more out of the EU research pot than it puts in, but that will almost certainly change, probably to a model in which the United Kingdom pays into the programme in line with what it receives. UK policymakers are unlikely to be able to ‘cherry pick’ access to their favourite elements of Horizon Europe, such as the prestigious European Research Council (ERC), says John Womersley, director-general of the European Spallation Source in Lund, Sweden, and former head of one of the UK grant-giving councils. Instead, he suggests, the country would be paying to be part of a wider programme that mainly focuses on applied research in European priority areas including inclusive societies and climate change. Convincing the treasury to pay a bill perhaps as high as €10 billion over seven years could be “an uphill struggle”, Womersley says.

How can the UK associate if freedom of movement ends?

Under the existing Horizon 2020 research programme, Norway and Switzerland — both non-EU countries — have to allow the free movement of people across their borders to associate with the research programme. This is something that the UK government has already ruled out. But the EU has suggested that it might be more flexible on the conditions of entry for the next programme. Beth Thompson, head of UK and EU Policy at Wellcome, says a UK system that guarantees mobility for researchers — such as a fast-track visa for researchers that the UK government announced on 27 January — could be enough to secure an agreement. The Global Talent visa route will open from 20 February, upgrading and expanding the underused ‘exceptional talent’ visa and allowing the country’s main research funder, UK Research and Innovation, to endorse candidates.

The scheme will have to be slick to avoid being overwhelmed by the tens of thousands of EU researchers who arrive in the United Kingdom each year. EU nationals from outside the United Kingdom currently make up 18% of the UK academic workforce — although that figure fell for the first time in 15 years in 2018–19, according to figures published on 23 January by the UK Higher Education Statistics Agency.

What about EU regulations for chemicals, the environment and data?

From 2021, the United Kingdom will be free to set its own regulations — including those on chemical safety, environmental standards and data use. If the country were to choose to keep the same regulations as the EU, it would be easier to reach a trade deal and to associate with Horizon Europe.

However, chancellor of the exchequer Sajid Javid has said that UK businesses should prepare for regulations to diverge. This could disrupt industries from aviation to pharmaceuticals — all chemicals travelling across the border, for example, could require re-testing and registering.

Another concern for scientists is the ability to transfer personal data between the United Kingdom and the EU. Even if the country keeps its current standards, data will not be allowed to flow in from the EU unless the European Commission formally agrees that the country’s data protection is up to scratch. This is neither guaranteed nor immediate.

Can the United Kingdom’s future scientific relationship with the EU be agreed by 31 December?

It’s possible, says Thompson, but it will be a challenge. A mock negotiation exercise carried out by Wellcome and Brussels-based economic think tank Bruegel found that there is only a “remote” chance that the United Kingdom and the EU will be able to agree a wider trade deal in 11 months. But the report, published on 28 January, concluded that it might be possible to agree an unprecedented standalone deal for science. For this, both sides would need to agree to make an exception for science, for example by establishing special visas for researchers and setting up a system that allows UK organizations to opt in to EU data standards.

But James Wilsdon, who studies science policy at the University of Sheffield, UK, is not convinced that science could jump ahead of other issues in the negotiation queue. The optics of the country signing a sizeable cheque to the EU while difficult political negotiations continue would “not be attractive”, he adds.

What if the United Kingdom doesn’t manage to join Horizon Europe before the end of 2020?

This would be disruptive: “Both the UK and EU will lose out,” warns Thompson.

Without association, UK researchers would be able to be only a ‘third country’ in Horizon Europe: they could participate in some EU-funded projects but not lead them, and only if the government agrees to pay their costs. If a wider trade deal is not reached, that could also affect travel, data sharing, clinical trials and crucial laboratory supplies. UK researchers will almost certainly need visas to take up jobs in EU nations, whether or not the United Kingdom can craft a new immigration system in time.