8th MCAA Newsletter
MCAA General Assembly 2016: what happened?
The official minutes of the General Assembly will be published in due course, once the processes of approval and legal deposition have been completed.  However, for those who do not want to wait for this, here is a rough idea of the day’s events.

Like the MCAA Conference on the previous day, the General Assembly took place on the Saturday 5th March (09h00 to 17h00) in the in the historic Auditorium S. Margherita of the Ca' Foscari University in Venice. A total of 188 MCAA members were present or represented. 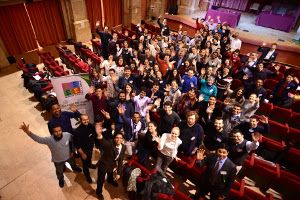 Following this introduction, the more formal aspects of the General Assembly were initiated by Maria-Antonietta Buccheri, Secretary of the MCAA Executive Committee, with a presentation of the minutes of the 2015 General Assembly in Porto; the members formally approved these minutes. Maria-Antonietta then went on to present the report on 2015 activities, before handing over to Roy Someshwar, Treasurer of Executive Committee, who presented the 2015 Financial Report detailing the distribution of the annual budget and other financial matters; again the members formally approved this financial report. A final formal part of the proceedings was presented by Francesco Grassi, Vice-chair of the Executive Committee, who briefly presented the nine official Working Groups and twenty official Chapters currently within the MCAA, and confirmed the formal appointment of each chair-person of these nine groups and 20 chapters, who are also ex-officio members of the MCAA Board.

After these formal proceedings, two ‘think-tank’ sessions were presented. The first session, presented by Zoran Andjelic and Mauricio Manfrini, looked at proposals for a ‘structural profiling’ system amongst MCAA members. This will aim to solicit members to define their sector(s) of activity in a new ‘vertical profiling’ section of their personal profile; this additional information will facilitate inter- and cross-disciplinary and multi-cultural synergies and networking amongst members, allowing stronger and more productive professional and/or business relationships to be nurtured. The proposal document they presented is available to members in the MCAA Library at https://www.mariecuriealumni.eu/library/mcaa-structural-profiling

The second ‘think-tank’ session focussed on how MCAA members could contribute more to association activities, with presentations by two speakers. Firstly, Roy Someshwar went through the various schemes currently available under which members can use MCAA funding to initiate and support a range of networking activities. Secondly, Brian Cahill illustrated how the German Chapter had leveraged both local and association resources to organise activities that attracted record numbers of new chapter and association members in German.

After lunch (again in the Ca’Foscari main building with magnificent views across the Grand Canal) the members proceed to elect the members of the new MCAA board that would serve from 2016 to 2018. The election was introduced by Odissefs Panopoulos, who emphasised the importance of this election, invited the members to study carefully the document with the profiles of each of the 25 candidates, and explained the electoral process whereby each member could vote for their preferred candidate(s) to select the eleven members of the new MCAA board. The members then proceeded to vote, and there was then a coffee and informal networking session while the votes were counted. Odissefs Panopoulos announced the results of the election for the eleven Board positions, as follows: